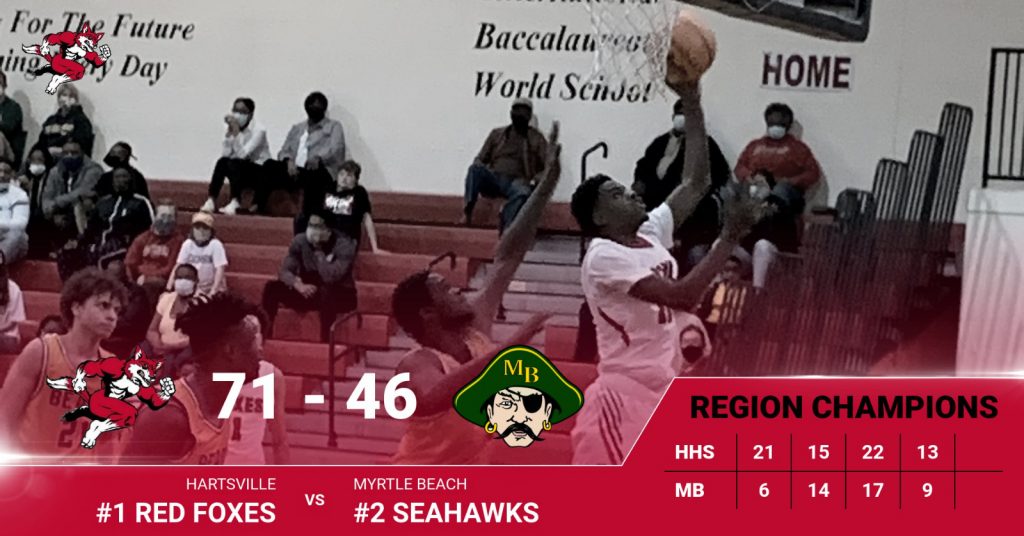 Congratulations to Coach English, staff, and players on their defeat of Myrtle Beach Thursday night for the Region VI AAAA Championship. The last time the two teams faced off it was a fight to the end. The game went back and forth and ended with a last second shot in overtime by Myrtle Beach’s leading scorer.

Thursday night was a different story. The Red Foxes seemed to be lights out from all over the court. The Red Foxes jumped out to a big lead after the first quarter 21-6. From there, the Red Foxes never looked back. Hartsville continued to push the tempo throughout the second half resulting in a final score of 71-48.

The Red Foxes found themselves in the championship game winning back to back nights on Tuesday and Wednesday. On Tuesday night the Red Foxes hosted Wilson in a tight game that came down to the last three seconds. The second round matchup was at North Myrtle Beach where the Red Foxes came back from a halftime deficit to defeat the Chiefs. Thursday night, the Red Foxes dominated the court and pulled out their first Region Championship since 2013!

Hartsville will be the #1 Seed from Region VI as they move into the playoffs on Feb. 22.